As a design engineer, first at Nvidia and later at Oracle, he helped develop products that “pushed the edge of technology” yet found few buyers in the market. This raised the question: What makes a product successful?

“Engineers decide how to build something. It’s the product managers who figure out what we need to build to solve a customer’s problem,” says Rohan, a student in the Berkeley Haas Evening & Weekend MBA program. “I really enjoyed being on the product management side.”

Around the same time, Rohan noted an industry trend of consolidation among hardware companies and a boom among software firms.

“I realized that soon there would be very few companies specializing in hardware whereas software was gaining more and more ground,” he says. “So not only did I want to switch to product management but also recognized I needed to move over to building software products.”

But he was unable to make the switch right away.

Achieving his goal would take a two-pronged approach—one to build his business savvy, the other his network—so Rohan applied to Berkeley Haas and simultaneously got involved with the larger product management community.

To his amazement, he reaped results within six months of entering the Berkeley Evening & Weekend MBA program.

He credits the program with helping him hone his interpersonal “soft” skills through courses on negotiations, leadership communication, and power and politics. He got to practice those skills at his job at Oracle and through International Business Development, an experiential learning course where students serve as consultants solving real-world problems for clients.

“I don’t think I would have gotten these experiences anywhere else but Haas. I’ve gained not only information but also experienced personal growth.” 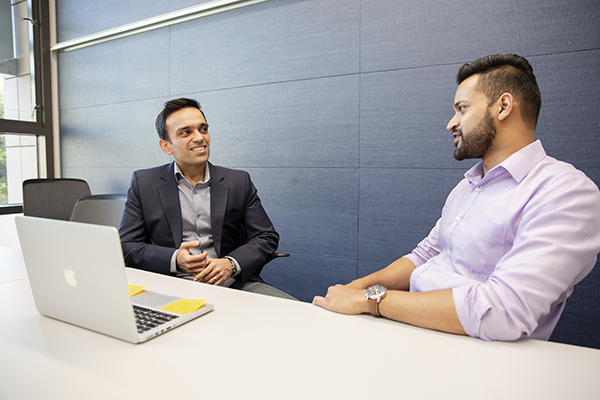 Rohan used the skills he was learning in the EWMBA program with the knowledge acquired from involvement in the product management community—volunteering with the Silicon Valley Product Management Association, Lean Product Meetup, and the annual Product Leader Summit—to position himself for a double career switch. Soon, he could swap both role (engineering to product management) and industry (hardware to software).

So he began searching for opportunities within Oracle.

The timing was perfect, because Oracle had recently acquired cloud-based software provider Ravello Systems. Rohan connected with Ravello co-founder Navin Thadani, who was then serving as vice-president of product development at Oracle.

“After multiple meetings with him, a job opened up and he was happy to have me on board as a product manager.”

Now a senior product manager at Oracle, Rohan is part of a team that oversees the Oracle Cloud Infrastructure, a platform that offers a suite of B2B software services.

Helping others to switch

Soon after, Rohan reached out to classmates and others interested in making a similar career shift. As VP-Careers for the EWMBA Association, he arranged “One-to-Many” sessions where students could learn about other careers—including product management—from peers working in the field. He also shared his story at a fall 2017 Career Day event.

His hope is that he can inspire others to pursue their dreams and convey how a Berkeley MBA helped make his possible.

“I wake up happy every day that I made the change to product management. I really enjoy having an impact on the product itself and helping solve customers’ problems,” he says. “One day I hope to expand from B2B to B2C products and the Haas course Growth Hacking is already helping me gain experience in that area.”

Thinking about a career change? See how the Berkeley EWMBA program can help you make the transition.