Student Always, this Marine also had a lesson or two to teach

When Staff Sergeant Edgar Vigil, MBA 18, left the Marine Corps, he started intensive training right away—but this time it was on how to transform himself into a civilian. 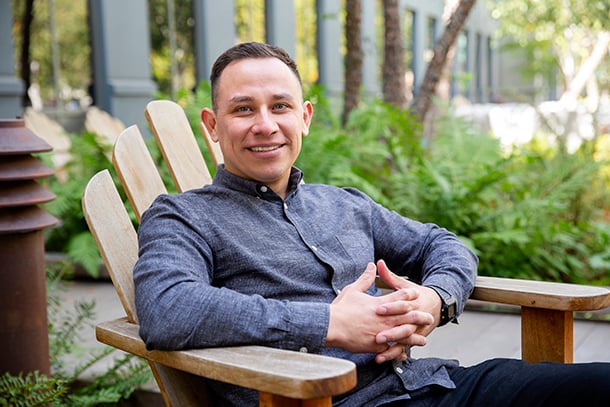 “Leaving the military and transitioning into civilian life is difficult because you have to translate your skills,” he says. “But how do you translate shooting a rifle or launching grenades into the business world?”

Edgar is half joking. With nine years in the Marines, he was indeed a rifleman—every Marine is. But he was also an expert on the F/A-18 fighter jet radar system, a combat marksmanship instructor, and a specialist in process improvement.

But he’s serious about training to be a civilian.

“I went on to YouTube and Google to teach myself because it’s a different world,” says Edgar. “In the military you say “sir,” but you don’t in the business world and you certainly don’t salute! But what’s the body language? How do you greet people? How hard do you shake hands? And in the business world, people don’t have to obey orders. Instead, you have to use your influence. And you have to learn how to write a resume, do an interview, and follow up. It was a big endeavor.”

Fortunately, Edgar had several things going for him. In the Marines, through extensive course work, he’d become an expert in Lean Six Sigma, a method for improving the quality and efficiency of business operations.

That training, plus a prospective boss who was also a military vet, got him a job at Kaiser Permanente. Then it was on to Blue Shield, then Walmart and Facebook.

In the Marine Corps, everything was black and white. Taking a class on innovation forces you to think more creatively and abstractly."

After a few years, Edgar thought, “I knew I’d been the best Marine I could be, but I didn’t think I was the best civilian I could be.” For that, he says, in the business world, an MBA was a baseline requirement.

Berkeley Haas was an obvious choice, as it is for many veterans, in part because it’s a public institution, and under the Post-911 GI bill, Edgar qualified to receive full tuition. Also, Berkeley’s Evening & Weekend program enabled Edgar to continue working at Facebook.

And then there was Richard Lyons. Edgar says he was influenced by a YouTube presentation by the former Berkeley Haas dean on why veterans related to the school’s four Defining Leadership Principles. A personal call from Dean Lyons sealed the deal.

Edgar had already come a long way before he walked on campus. Born in Salinas, the son of an immigrant farming family from Michoacán, Mexico, he followed his older brother and joined the Marines straight out of high school. During his nine years in the corps he earned a bachelor’s degree in business, taking classes on Marine Corps bases through Columbia College.

Still, Edgar says he felt a bit of “imposter syndrome” as he approached the first semester at Haas. “I’d never been a student in a traditional campus environment with fellow students that were not military,” he says. “And that’s an experience I wanted.” But was he prepared, was he qualified, did he belong?

The way he handled what he calls this “mental barrier” was “to practice my story,” he says. “As cliché as it sounds, I would tell myself that I can do anything I set my mind on. As long as I follow my values and principles, nothing can hold me back.”

The image he drew on was sitting on a stump, listening to that same advice from his grandfather on family visits to the village of La Lobera, Mexico.

He also immersed himself in the Berkeley Haas culture by going to mixers and networking events.

“People opened up to me,” he says. “They were inquisitive about why I joined the military. They were genuinely interested in my story and said it opened their eyes to a different way of thinking. That gave me the feedback that said I did belong.”

So far, one of Edgar’s favorite courses at Berkeley is Negotiations and Conflict Resolution. He also liked the Power & Politics in Organizations course.

“It’s about the different sources of power people have,” he says, “whether it's being an expert, or the position you hold, or rewards you can give.”

The toughest course for Edgar was the Applied Innovation course.

“In the Marine Corps, everything was black and white,” Edgar says. “Taking a class on innovation forces you to think more creatively and abstractly.”

Of course, a Marine Corps staff sergeant has a few things to teach as well. Edgar says sometimes when a classmate is worrying over a problem he’ll ask: “Is anyone shooting at you? Anyone lobbed a grenade? Well then, maybe you’re still OK.” 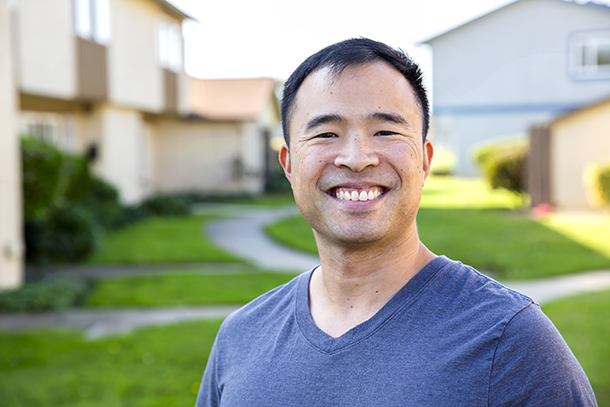 Matt Dunn, EMBA 19, is always picking up new things to learn and seeking to expand his world with new people and ideas. During his time at Haas, this ... 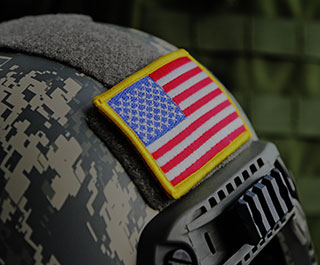 Today and everyday, Berkeley Haas celebrates veterans everywhere. We've built a strong community of veterans here at Haas. This year, we have 78 US ... 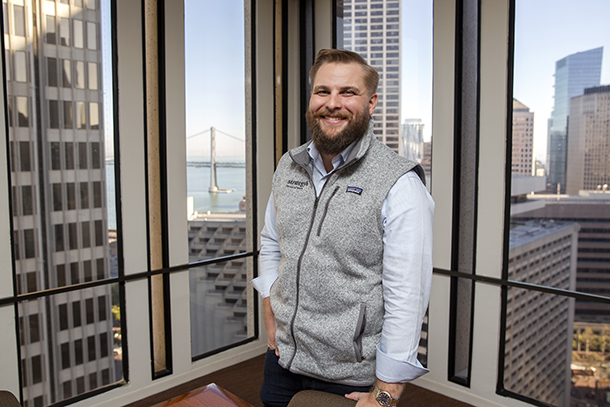