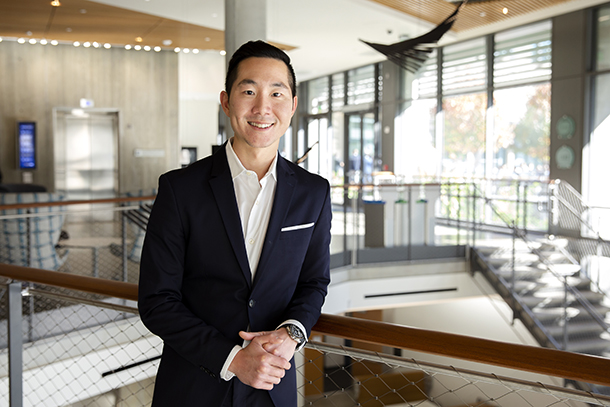 For much of his early career, Justin Li, MBA 22, wanted to have some social impact. “I often thought I should have been a doctor,” he says.

Instead, he earned a BS in finance at the University of Colorado. Then he dove deeply into hard-core finance, first at Phillips 66, where he forecast fuel derivatives markets, then at FactSet, a major financial data provider for institutional asset managers, where he set up its Los Angeles office and led its consulting business.

Then he got the call. It was from his father, Shu Li. The elder Li had founded and sold a number of high tech companies. And he’d formed another: Laboratory for Advanced Medicine (LAM), a startup early cancer detection company that focuses on advanced DNA methylation techniques.

“I was happy at FactSet, and while I’d been following what he was doing, my father hadn’t asked me to join him at LAM, and I hadn’t asked. But then I was home one weekend and he just said, ‘I’m working on this once-in-a-lifetime effort to save lives,’ ” says Justin.

“Everything else pales in comparison. He asked me to join him and, as they say, it was an offer I couldn’t refuse.”

Justin says he wanted to earn an MBA in part to expand his network of colleagues in the field but also to acquire new leadership skills to address the unique challenges he’s facing in his new role. The company recently received Breakthrough Device designation from the FDA, awarded to novel technologies that address life-threatening or irreversibly debilitating diseases.

"In a small startup, it’s really belt and suspenders, trial by fire,” he says. “There isn’t a formal infrastructure in startup companies that can teach you how to lead with data-driven methods that are proven to work.”

“The first one that struck me was that employees aren’t necessarily motivated by money,” he says.“I’ve always had motivations other than money, but, I know it sounds absurd, I didn’t know others felt that way, too.”

As general manager at LAM, in addition to finance duties, like securing a series B fundraising, he’s responsible for bridging the strategic goals of the executive team with the rest of the organization. That means knowing what motivates the scientists, marketers, accountants, and others that he works with daily.

He points to another concept that he learned in Rebecca Portnoy’s class: the idea of fixed versus growth mindsets.

“If you have a fixed mindset and you don’t reach a goal,” says Justin, “then you tend to focus on blame—that you aren’t intelligent or you’re not cut out for the job. And you may give up. But if you have a growth mindset and you get constructive criticism, you can learn from it and get better.”

At Haas, everyone is extremely disarming, friendly, and open."

One key for a leader, he says, is to be able to frame questions to incorporate a growth mindset, which can mean focusing less on the result achieved and more on the effort expended. Many times, there’s a disconnect between an employee’s efforts and the bottom-line results because there are factors outside of their control.

That more humanistic approach was important to Justin.

“A lot of why I chose Berkeley Haas had to do with its culture,” he says. “They have these four Defining Leadership Principles, and one of these is Confidence Without Attitude. When I visited other campuses, people had egos; they wanted to grow, but they didn’t necessarily want you to grow. But at Haas, everyone is extremely disarming, friendly, and open. People aren’t always trying to be CEO of the group. It’s an environment in which you can learn and grow.”

So, what kind of leader does Justin want to become?

“I want to be a leader who empowers people,” he says. “We have a mix of people here at LAM. We have the analytical types, the businesspeople, the marketers, the scientists with PhDs or MDs. To coordinate their efforts, your leadership style has to accommodate people and what drives them, because you want them to be competent in their jobs and confident in improving what they do.”

And as for having that social impact he desired?

“With a finance background and working on ways to detect cancer, I feel I’m in the exact right place because this allows me to leverage what I’m good at to make a positive impact on people’s health and wellness. It’s humbling to work with some of the best doctors and scientists out there…for the greater good.”