At the Diversity Summit for Working Professionals

This fall, Berkeley Haas students in the Evening & Weekend and MBA for Executives Programs organized a Diversity Summit for Working Professionals.

Dean Rich Lyons welcomed attendees, telling them, “You can’t be what you can’t see.” When a mentor suggested he pursue his PhD, it was the first time Lyons had considered such an idea. “I had a lot of advantages as a young person, and there was a career path that was totally unavailable to me in the sense that I couldn’t see it,” he says.

Four years later, he was in a PhD program for economics and became an academic.

“It was a totally different life than I was planning, and it was because that person stepped into my life and said, ‘You need to think about this.’ That’s part of what Berkeley Haas is about, as well.”

Students coming to the business program learn finance, management and critical thinking, but they also learn their identity and to redefine how business operates in society, he says.

“We are actually not just in the knowledge or learning transfer business, but in the identity-making business, ultimately,” Lyons says.

Attendee Sandy Hobbs moved to the Bay Area in 2007 and decided to advance her career now that her son is out of the US Navy and she would have more time for school.

The diversity summit showed her what Berkeley was about, she says. “I’m ready to look toward the next step of my career and what I want to do. I’ve liked the school before and I think this just really helps solidify that.”

Sandy moved from the Pacific Northwest, an area she did not find very diverse. The diversity was part of what drew her to Berkeley, she says. “Coming to the Bay Area, I was introduced to all kinds of diversity. I find it interesting, and that’s the kind of community I wanted to be involved in.”

Jorge Pena, who graduated from Berkeley in 1993, found himself in a similar situation as a parent. He is a father of four, and two of his children are in college, freeing some of his time to go back to school. Jorge is a project manager at La Clinica in Oakland and always wanted to invest in a formal business education. He attended because he wanted to see “how people balance their job and their families.”

Most attending were professionals later in their careers. Joshua Olivar is a recruiter for Google Cloud Platform and served in the military before that. He says, “It’s really important that the school actually lives and breathes some of the values that drive me. I’m a recruiter so I talk to people from all walks of life, and Berkeley people just really stand out to me.”

Since working at Google, Joshua has been thinking about how he can increase diversity while hiring at the company. “I’m looking to continue my education so I can take on more leadership positions,” he says, “and understand the business in a way that I really can drive diversity in the future and make it grow organically at institutions.”

Sandy, Jorge, and Joshua all attended the diversity summit to learn more about Berkeley MBA Programs. We invite you to do the same. 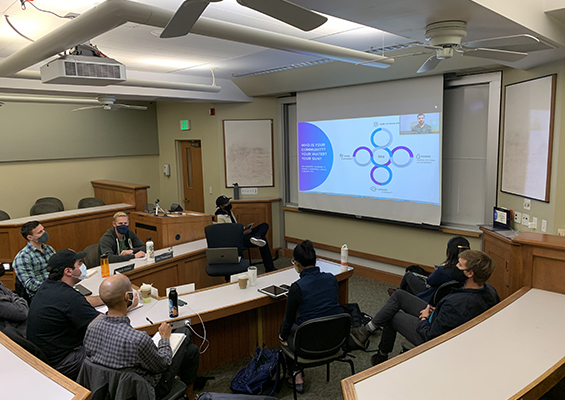 When I mention to someone on campus that I’m a “manbassador”—a portmanteau of “man” and “ambassador”—it usually elicits a curious chuckle. The Haas ...