WeFinance: Funding for the Student Crowd

It’s a common student dilemma: you’ve got a full-time offer post-graduation, but you still have several more months to finish your degree. And you’re facing the up-front costs of relocating—before your first paycheck or signing bonus hits your account.

What do you do? Often, your only option is to pile more credit card debt on top of your student loans, and bite the bullet on the high fees. 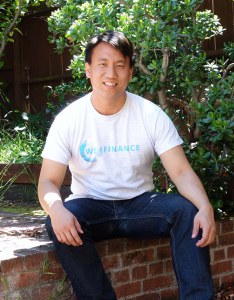 “Many students are paying seven to 8 percent on their student loans—even higher if you’re international—and they have living and moving expenses,” Chu says. “They're low-risk borrowers but their credit scores don’t reflect that, and they can’t refinance until they have more credit history. Meanwhile, a peer lender in these students’ network could earn four percent or more on their extra savings.”

WeFinance launched with two critical resources. First, it has a software platform built by co-founder and CEO Eric Mayefsky, a Stanford econ PhD grad and ex-Facebook product manager who spearheaded the concept. This platform fully automates disbursements and repayments between borrowers and lenders, allowing both parties to rest easy that payments are made on time. Second, WeFinance has been tested by Chu’s network of fellow Haasies, a dozen of whom have signed on as guinea pigs seeking funding.

“My classmates have been incredibly supportive, willing to try out the product,” he said. “Faculty members have provided core guidance.”

Ton Chookhare, MBA 14, used the platform to refinance some of his higher-interest student loans, raising $5,000 in just a few weeks and lowering his interest rate from 8 percent to 4 percent. He already had accepted an offer with Kaiser Permanente, and was working on a side project involving custom suits made in his hometown of Bangkok, Thailand. "I think many people will be surprised at how willing people in their network are to offer financial support, especially when they're getting much better returns while supporting someone they know and trust," he says.

Chu says when he came to Berkeley-Haas, he thought he might end up working for a startup—but had no intention of launching his own. His thinking evolved while taking Entrepreneurship with Prof. Toby Stuart and Lecturer Rob Chandra. His new path began last summer when a Stanford MBA friend saw an email from Mayefsky seeking help with the venture. After a few months of working well together, Chu—who previously worked at Credit Karma and Kiva—became a co-founder. He's focusing on marketing, partnerships, and growth while Mayefsky develops the technological infrastructure.

“I’ve benefitted from starting this in my second year, after I had a strong base, and I’ve been able to piggyback on my coursework and lessons learned from my peers who launched businesses last year,” he says. "In particular, New Venture Finance with Asst. Prof. Adair Morse has been useful.”

Chu’s goal is to expand WeFinance to 40 schools within a year, beginning with Stanford, Harvard, and Wharton. In addition to MBAs, the company will focus on law and other top master’s and undergrad program students.

Read more about WeFinance in TechCrunch.