…and not just those of its students. 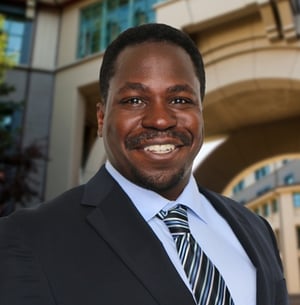 Jonathan Stuart, an undergraduate student at UC Berkeley and a work-study, recently traveled to Atlanta to represent the program at the Atlanta University Center Consortium's (AUCC) Graduate School Fair. Composed of the historic Morehouse College, Spelman College, and Clark Atlanta University, the AUCC is the crown jewel of the Historically Black College and University system’s Ivy League.

Jonathan transferred to UC Berkeley from Glendale Community College in 2016 to study Mathematics, later changing his major to Statistics. As a transfer student, he joined the ranks of countless other non-traditional, re-entry students seeking bachelor’s degrees from the University. Currently in his senior year, Jonathan is closing out an up-hill battle that ultimately proved successful.

Stuart's path has been unconventional pretty much from the beginning. During high school, challenges at home and personal, identity-related, challenges caused his academics to take a back seat. He credits his parents for doing an excellent job providing for him, but he believes that he wasn’t one of those students groomed from the beginning for academic and professional success. "I didn’t have the extra-curricular activities and all the enrichment experiences that make for a stand out application, but that didn’t mean that I wasn’t capable of long-term success. It just meant that I had to work harder for it."

After high school, Jonathan found himself unprepared for and uninterested in a college education. After taking classes at Laney College for a short time, he chose to enter the workforce, opting for life experience rather than classroom experience. It was years before it became clear to him that, in order to comfortably support himself and a family, he'd have to climb a few tax brackets. That meant an education and, most likely, an advanced degree, so he did it. He dropped everything and started the long journey from college algebra and pre-calculus classes to a STEM degree from a top-tier university.

Like so many others from low-income backgrounds, Jonathan has worked while simultaneously taking classes in order to fund his education. Looking around the work-study site, he came across a listing for a position in the MFE Office. He did a little research and decided it might be fun to work there, so he applied. He interviewed and was offered the job shortly thereafter. Currently, Jonathan is in his third year with the MFE Office.

Jonathan’s time with the MFE has impacted both his academic and professional development. Particularly influential were the numerous and frequent opportunities to meet members of the financial community, from students and recruiters to accomplished industry leaders and quantitative professionals. Most notably, however, he credits the exposure to impressive applicants, and highly talented admitted students, which broadened his sense of what was professionally possible for him. "Last year, the MFE program's acceptance rate was lower than that of the University as a whole, so we’re really talking about the best of the best here.”

For Jonathan, the MFE program and the people associated with it just exude a standard of excellence. "You can’t be here and not want to be better, to be functioning at a higher level than you already are. Lab Manager Aaron Nebres is just the sweetest and most helpful guy you could imagine. He’s incredibly knowledgeable and has a fix for literally any IT or data problem you could image. Admissions Specialist and Associate Director Diane Nguyen is a real gem. Her years of experience with the program have helped her grow into a powerful, extremely knowledgeable, administrator. And Assistant Dean Linda Kreitzman? Well…no words. I can only hope to one day possess even a fraction of her confidence, compassion, dedication, and dynamism.”

Jonathan attributes the elevating nature of the MFE program to the efforts of these three, commending them especially for the family-like atmosphere they have created, and their unceasing willingness to offer advice and guidance.

“The switch from math to stats came as a result of my time in the MFE as well, upon informed advice. Also, working here I got to see the practical application of stats over math, especially with regard to machine learning, artificial intelligence and data science; clearly the direction of modern finance. And of the world, in fact.”

Jonathan Stuart and Assistant Dean Kreitzman have teamed up to form an off-campus mentorship program aimed at introducing underrepresented students from surrounding high schools to careers in STEM available through the MFE. Jonathan has also accepted a return offer from Bank of America, following a successful summer 2018 internship. He will be working in fundamental research and quantitative solutions, looking forward to his return to the MFE, this time as a student.

The Berkeley Master of Financial Engineering Program, a STEM designated degree, provides you with the knowledge and skills to prepare you for a career in the finance/fintech industry.