Leadership as Destiny for Executive MBA Student in Nonprofit

The daughter of Guatemalan immigrants who grew up in San Francisco’s Mission District, Cristy Johnston-Limón has always figured out how to navigate life’s challenges—as a teenager turning away from gangs, as a young urban neighborhood activist, as a first-generation college student at UC Berkeley, and now as a student in the Berkeley MBA for Executives Program.

She is also executive director of Oakland's Destiny Arts Center. And for this MBA, nonprofit is paramount; her objective in pursuing her MBA is to gain the business skills required to ensure the center's future in an environment increasingly focused on nonprofit ROI.

In her role, Cristy works to create new opportunities for kids in a city impacted by high drop-out rates and violence. Over the last five years, she has more than doubled the number of children served by boosting Destiny Arts’ operating budget from $800,000 to $3 million. More than 4,000 students—ranging from age three to 24—now choose from 800 classes annually in everything from hip hop to kung fu and karate.

But when Cristy was hired at Destiny Arts in 2011, the nonprofit was facing eviction from its shared space at a local charter school, and its board was reluctant to take on the crushing loan payments that might come with a new building.

Cristy began scouting for possible sites even before her first official day on the job, touring more than 50 and deciding upon the one she wanted for Destiny Arts. 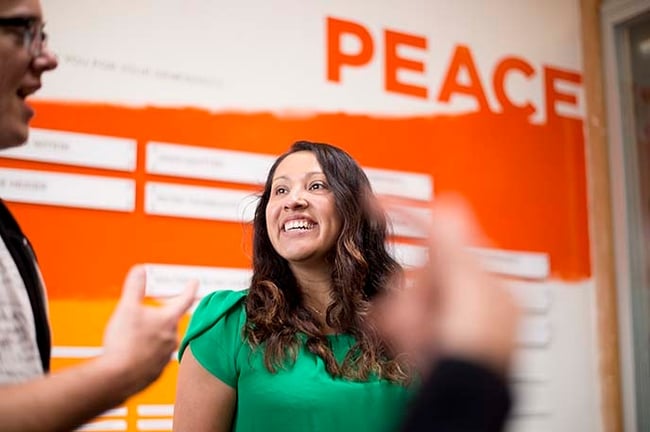 It was a tough sell, but working with board member David Riemer, Cristy met repeatedly with the the board, listened to what they had to say and calmly countered every argument against the building plan. “We kept laying brick after brick after brick,” until the skeptics got the reassurance they needed, says David, an Executive-in-Residence at Berkeley-Haas. “Cristy is a leader with an incredible combination of confidence, ambition, passion, and vision.”

Despite her leadership strengths, she admits to having had a few nerves when she began study in the Berkeley EMBA program last year, worried, in particular, that she might not have the quantitative skills required to keep up.

She soon came to realize that the diversity of student backgrounds and skillsets enriches the Berkeley EMBA experience. “We all bring something different to the table, and I've come to know my classmates as truly extraordinary individuals," she says. "I have never experienced this level of authenticity with such an accomplished group of people.”

Read the full story on Cristy Johnson Limón at Haas Now, and meet some of the extraordinary people in the Berkeley executive MBA program by checking out our student profiles.