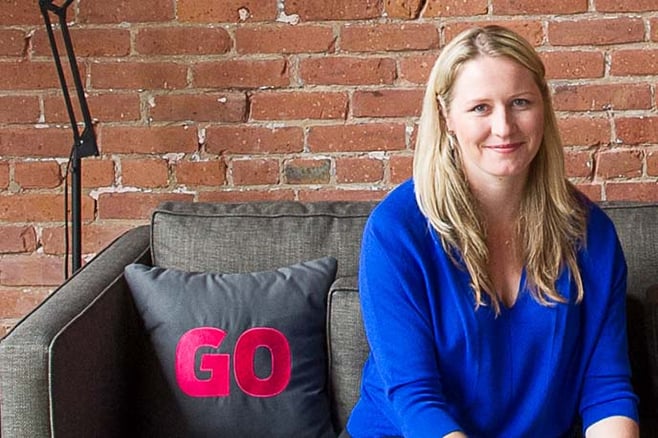 Change with an MBA

She worked in finance for more than six years, learning about the world, business, and how things worked. Then she wanted to change it.

Challenging the idea that finance, the way it’s always worked was the way it was going to continue to work, was Danae Ringelmann's driving motivation. It was what meaningful work meant to her.

“In order to change the world, I wanted to be in an environment that would allow me to really think big and experiment,” says Danae.

Danae searched for a place that would support her ideas and help them grow into something impactful. One of the Berkeley-HaasDefining Principles, Question the Status Quo, was key to her vision and her decision to pursue her Berkeley MBA.

Danae’s for revolutionizing finance and democratizing fundraising, was soon realized when she met her business partner, fellow Berkeley MBA student Eric Schell. Together they founded Indiegogo. One of the first crowdfunding websites in the world. The work had just begun.

Indiegogo launched during the height of the recession and endured difficult times early on—2007 to 2009 was a hard time for startups. For Indiegogo, 92 venture capitalists declined to invest. And for three years the co-founders—Danae, Eric, and Slava Rubin— struggled to make it.

“When the rest of the world was calling us crazy, Haas was there to say, ‘Keep going. Keep iterating. You’re not going to get it right the first time, so keep trying again.’ So we did,” Danae says.

At Haas the support never wavered. From the faculty all the way down to her fellow students. A sizable chunk of classmates even kicked off their own Indiegogo projects.

“Berkeley-Haas’ unconditional support of Eric, Slava, and myself is a testament of the school truly living our values, particularly Question the Status Quo and Beyond Yourself,” Danae remembers.

Unlike current Indiegogo crowdfunding campaigns that can take 1 to 3 months to reach their goal, for a startup like Indiegogo it took four years to finally raise the needed funds.

It wasn’t easy, but finally it happened. Indiegogo moved to revolutionize the finance world.

Success of an MBA

Indiegogo has hosted some 300,000 campaigns in 223 countries and territories and has helped lead current global crowdfunding upward of $34 billion.

Hour of Code, one of the most-funded campaigns, offered free computer-science tutoring to tens of millions of students across the world in 180 countries.

Lighten the Load, a baby sling maker for parents fleeing war and persecution, was 400 percent funded in just two days.

And one empowering stat Danae is especially proud of: 47% of campaigns that exceed their goals on Indiegogo are run by women.

“We’re distributing millions of dollars every week to entrepreneurs and artists and charities across the world,” Danae states.

It’s been a successful revolution, but it continues. The entrepreneurial spirit of its founders still pushes on. Indiegogo has a fee-free personal-cause fundraising platform and most recently they launched an industry-first equity crowdfunding platform where financial investors can now support innovative startups for as little as US $100.

Danae chose the Full-time Berkeley MBA Program because at Haas, we support big ideas that revolutionize the way business is done. She saw an opportunity to change the financial world ...What will your opportunity to make a revolutionary change be?

Learn more about the possibilities you'll find with Berkeley-Haas.

Angela is the Associate Director of Full-time MBA Admissions at Berkeley-Haas. She has over a decade of experience working in higher education and nonprofit organizations throughout California. She enjoys meeting prospective students and sharing the story of the incredible Haas experience and culture.