Sal Parsa, MBA 18, once believed his destiny was to become a tailor, or a mechanic.

Born in Afghanistan and raised during Taliban rule to a family without much education, Parsa didn’t have many options. By age twelve, he was going to school half the day and working the other half sewing clothes.

That would have been his future, too. But then something happened: the Americans arrived in his hometown of Herat.

Like the other kids in town, Sal was fascinated by the men with guns who were handing out candy, and he wanted to find out more about them.

“I was a kid, so I wasn’t seen as a threat and I could approach them and try to talk to them,” he says. “They looked scary at first but they were friendly and kind. Those first encounters were what began to change my life.”

Under the Taliban, his education had been limited, but now there were new books in the library and classes to take. So he did, going to study English after he was done with work at night. And it was those English classes that led to him being selected—through an exhaustive, months-long exam process—to spend his junior year of high school in the United States under a State Department youth exchange program. 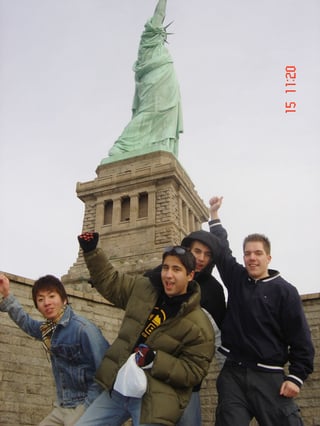 So in 2004, he found himself going to high school in upstate New York. It was a different world, but Parsa—already a bit of an overachiever—was undaunted.

“I brought these huge dictionaries from Afghanistan—English to Farsi, Farsi to English,” says Parsa, a native Persian speaker who was learning English as a 3rd language. “Those dictionaries were my buddies. I used to record my classes, then go home and listen to them, and use the books to translate.”

It wasn’t just language he was learning, but culture. Living with a host family really showed him the US from the inside.

“They really treated me like one of their own,” he says.

At age 17, after a year in the US,  he returned to Afghanistan to finish high school and began work as a translator and cultural liaison for the US military. It was a period that Parsa describes tersely as “very intense times.” By then, the war was in its 4th year, and the Taliban was attempting to regain control.

As a translator, Parsa risked his life. “There was a $5000 prize for the head of a translator or anyone working or helping the Americans. I couldn't trust anyone,” he says.

Parsa recently opened up for the first time about those years at a Haas Story Salon—an event where MBA students share personal stories with classmates, with an understanding that everything said stays in the room.

“Sal connected with every person in the room that night by sharing his narrative,” says Greg Keiser, MBA 18.

Parsa says it was hard to talk about some things, but his trust in his Haas cohort made him willing to do it. “This would not have ever happened without these people,” he says. “I wouldn’t have shared my story.”

It’s not only his story that sets Parsa apart: it’s how it has shaped his approach to life. His background puts “problems” like a heavy course of study into perspective.

Parsa considers himself incredibly lucky and privileged. After those years working for the military in Afghanistan, he was invited to attend Walsh University in Ohio, where he was a new quantity for the small, Catholic school.

“I was the first Muslim living on that campus,” he says.

After some time after graduation spent working for large manufacturing company Timken in Ohio, he was considering a career in US intelligence when a mentor suggested he look into an MBA. Parsa remembers when he got the call from Berkeley-Haas.

“I was, in fact, right in front of Dunkin’ Donuts,” he laughs. 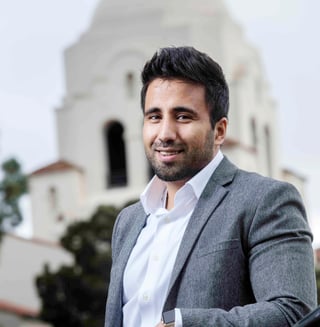 He credits that call, form Executive Director of Full-time MBA Admissions Morgan Bernstein, as something special: the moment when he felt that Haas really “got” him.

Bernstein recalls what stood out about Parsa: “It was clear that not only is Sal someone who embodies our four Haas Defining Principles, but that his life experience would allow him to bring a truly unique, and valuable, perspective to our community.”

After a just a few months at Haas, Parsa says he knows he’s in the right place: he says there’s nothing about his life right now that makes him stressed, even though he’s combining the full-time MBA program with a leadership role as the president of the data science club, a deep-dive into data science, and a hard push with classmate Greg Keiser on a startup idea for a career guidance platform. That’s on top of the fact he got married last summer.

But Parsa is ready for every opportunity he can find—at Haas, at UC Berkeley, or anywhere else.

“Sometimes I think, ‘I shouldn’t sleep,’” he says.

Maya is a freelance journalist based in Oakland, CA, and Budapest, Hungary. She enjoys meeting the inspired and inspiring people at Berkeley-Haas and sharing their stories. 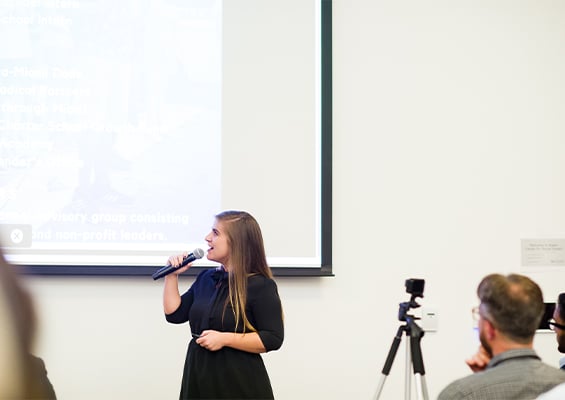