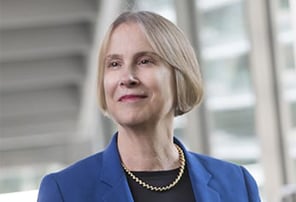 "It was a privilege to supervise all students I worked with.  Their projects were uniformly  impressive as was the students' deep mastery of the subject matter." - Nancy Wallace, Professor and Chair of the Real Estate Group

Dr. Nancy Wallace who teaches the Asset-Backed Securities Course in the MFE curriculum and is the recipient of the Cheit Award for Teaching Excellence this year supervised four teams for the Applied Finance Projects course; one of the teams was selected as the recipient of the Morgan Stanley Applied Finance Prize on March 12, 2021.  Dr. Wallace expressed how it was a privilege to supervise all students she worked with this year.

Sanket Ahuja, Vaibhav Barnwal, Hao Guo, Anshul Lakhani, and Jerry Qinghui Yu worked under Professor Wallace for their research on the relationship between complex weather patterns and risk of wildfire to property in the Southern California region.

The team believed in the power of the financial markets to fight against climate change and the project served that aim by shining light on the risk embedded in California's insurance system from the mispricing of risks. Using cutting-edge deep learning models fitted on high-frequency micro-climate data, the team managed to capture the trend, seasonality, and spatial correlation patterns of weather patterns. By combining the weather forecast with a probabilistic wildfire model calibrated on weather and environment data, they derived the risk of fire and the expected monetary loss for localities in Southern California. They found that the risk was significant in regions with mountainous terrain, dry climate, and high vegetation. They forecasted that the area could expect annual property damage worth about $6 billion with tail damages up to $10 billion.

The team further analyzed the distortion placed on the insurance market by the state government, which mandates the use of an infrequently updated fire risk map that caps the rate companies can charge to their consumers. Comparing and contrasting their data-driven risk map with that of the state, the team found that the risky areas defined by the state were no more prone to wildfire than the safer areas. As a result, the fire risk is not properly internalized by the market participants, which results in moral hazards in the system where participants are incentivized to build in risky areas defined as "safe" by the state. They further found that to break even for the insurance industry, above-median risk properties could be charged upward of 6 percent of their value to be insured against wildfire risk alone.

When asked about their experience working on the project, the team shared that they enjoyed the opportunity to work with the enormous dataset provided to them by Professor Wallace and the REFM lab at the Haas School of Business. Here is what each teams member said:

"Through the AFP project, we had the opportunity to work with a challenging real-world dataset to solve a pressing problem. I am confident that this experience will be very useful for our careers," said Anshul Lakhani. Sanket Ahuja added, "A fun, challenging problem at the heart of California’s crisis, with intellectual teammates and an advisor extraordinaire," while Vaibhav Barnwal said he enjoyed working alongside dedicated teammates and under the supervision of Professor Nancy Wallace. To which Camilla Hao replied, "We loved that everything we learned from the MFE program came together in this project, from methodologies like machine learning to the effect of climate change viewed from a financial perspective."  Jerry Qinhui concluded that "Not only did we succeed in the technical part of modeling weather and fire, but our results pointed to the weakness in the current system and its distortionary consequences."