We love visits from our alumni and we were so happy to see just last Friday MFE06 Eugene Lee with his wife, new baby and his colleague and MFE alumnus Guanghua Cao whom Eugene recently hired to work at his firm. 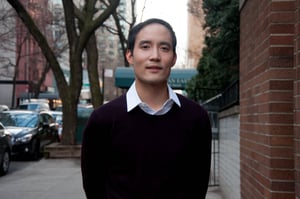 Prior to the MFE program, Eugene spent five years at a quant credit startup called KMV (later acquired by Moody’s Analytics) processing data for the company’s website analytics while supporting models and clients’ data questions. This experience was his first exposure to quantitative models being applied to financial assets but it already compelled him to apply the elegant combination of math, statistics, psychology, and finance to capital markets. However, Eugene did not have the quantitative foundation or experience to do this professionally and take the leap from a Bay Area fintech startup to Wall Street.

After researching graduate programs, it became clear to Eugene that the Berkeley MFE would give him the optimal confluence of skills and support for his goals. Eugene’s first conversation with me and my colleagues at an information session back in 2002 quickly dispelled his primary concern that one needed a math or engineering PhD to truly excel in the program. Our conversation gave Eugene the confidence to invest two years to take all recommended math and computer courses, finish two levels of the CFA course, and complete the MFE’s prep courses before applying to our program. Eugene let us know back then that he had never seen before a program investing in its prospective applicants with such care and absolute knowledge of the industry.

For Eugene, the Berkeley MFE easily remains one of the great investments of his life. The curriculum balanced deep technical applications of mathematical and computation models with a broad finance background to provide context for the models. As new securities and investment models have come in and out of vogue, this holistic foundation and mindset has been invaluable in staying nimble over the years. “While the workload at times was unbearable, the collaboration from my peers and the engaged faculty kept me on track and accountable,” said Eugene during his visit in the office last week. “In addition to the program’s rigor, the entire staff worked relentlessly to polish each student’s presentation skills.”

Ironically, Eugene’s short-term goal before applying for the MFE program was to work at Lehman Brothers. This came to pass when he joined the company as a trader for the firm’s global macro hedge fund in 2008. Fortunately, the fund performed well as the company collapsed and the asset management business continued under the Neuberger Berman banner. The collapse forced Eugene to think more deeply about the capital markets through his different roles and eight years at Neuberger.  After trading for a couple years, Eugene joined the portfolio management team first as an emerging market debt associate portfolio manager and later as a strategist for the company’s systematic multi-asset strategies.

Eugene’s interest and journey into the underbanked and early-stage direct investments started while analyzing the tail risks of emerging market sovereigns and their banking systems. While the capital markets were a powerful funding tool for many companies, they were not accessible to many pockets of the population, even those responsible for growing and sustaining the economy. In 2012, Eugene and a friend of his formed an angel fund to deploy dollars directly to companies and causes important to them. The following year, Eugene joined the Resolution Project as a social entrepreneur mentor for a Honduras-based agricultural startup. From this experience, the lack of funding options for solid but small businesses around the world was clear to Eugene and other mentors.

In 2017, Eugene made the full-time leap back to the fintech startup world, joining a software company utilizing credit models and machine learning to invest in P2P loans. In response to client feedback and to expand their outreach to the global underbanked, Eugene and his friend pivoted and created Digital Mosaic Capital this year.

Eugene hired also a Berkeley MFE alumnus, Guanghua Cao who is now Head of Research at the firm.

Their goal is to leverage their software and modeling capabilities to provide investors curated access to the next generation of loan originators in their quest to bring the underbanked to the mainstream. Despite being a series of extreme highs and lows, this venture would have been impossible without the collective relationships they have built through time.

From 2005 when he started the program to 2018, Eugene has come a long and great way and we wish him the very best!

We welcome our alumni’s stories! Send them to us!