Where Are Our Alumni Now? Catching Up With MFE15 Alumnus Chad Wildman

Do you have a promotion story to share with us? The MFE loves to hear them! We like to share them with our students because they can learn about the path alumni take after completing their MFE degree.

Let's take our MFE15 Alum Chad Wildman's example. Chad Wildman completed a Ph.D. in Mathematics with a focus on nonlinear partial differential equations at UC San Diego, but he wasn't quite finished with his studies yet.  Looking to pursue a career in finance, he joined the MFE Program in Spring 2014, which helped him launch his career through an Independent Study project with a hedge fund and an internship in New York City with Morgan Stanley.
Immediately after graduating in 2015, Chad accepted a full-time position in Morgan Stanley's Strats and Modeling Team as a Desk Strategist and made his move to the Big Apple.  From his internship within the Municipal Securities Quant Strategies group to becoming a full-time associate, he was subsequently named Head of Municipal Quant Strategies in January 2016.  In January 2018, he was promoted to VP, Head of Municipal Quant Strategies and Co-head of Municipal Electronic Trading.  Chad currently runs a growing team of 4 strategists (1 MFE, 3 PhD), overseeing all quantitative aspects of the municipal business, including an increased focus on electronic trading and connectivity. 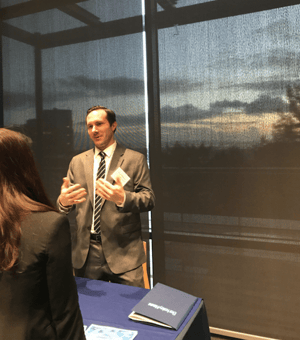 Since Chad left the MFE, he has kept in touch with the program, helping with interviewing applicants, and even visiting us when here in San Francisco for work or to visit his family.  In fact, he is pictured to the right at our MFE Firm Night recruiting event (January 25, 2018) in the Spieker Forum of Chou Hall at Haas.
Chad, we could not be happier for you!
Learn more about the Berkeley MFE Program and how we can help you launch or advance your career by going to our website or by joining an information session.