Members of the Haas Veterans Club spent an afternoon at VC firm Andreessen Horowitz, engaging in a case study on funding negotiations, learning about the tech employment landscape for vets, and sitting down with Founder Marc Andreessen. 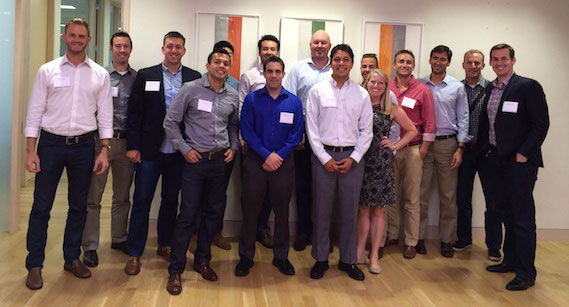 This fall, thirteen members of the Haas Veterans Club participated in a trek to Menlo Park-based Venture Capital firm Andreessen Horowitz (known colloquially as a16z). The trek was the result of coordination between Vivek Ahuja, MBA 15, and Elizabeth Ocken, a Marketing Partner at a16z, who met through the COMMIT Foundation (a national non-profit dedicated to supporting veteran career transition).

We arrived at noon and were treated to lunch in a16z’s impressive Executive Briefing Center, the site of hundreds – if not thousands – of meetings between corporate executives, government leaders, and Silicon Valley’s most promising entrepreneurs.

Capabilities Prized in the Startup Community
Following lunch, Juliet Nyatta, Chief of the Business Operations Team, provided us with an informative overview of Andreessen Horowitz, including the firm’s unique, portfolio company-focused architecture. Frank Chen, Chief of the Deals Team, then led us in a guided case study of the firm’s funding negotiations with a recent startup. Dividing the Veterans Club into two teams, Frank shared some key details from the negotiations and facilitated as we debated for and against investing in the company.

Following the case study, Michael Copeland, former Senior Editor of Wired Magazine and a16z partner in the Marketing Team, moderated an interview with Chief of the Technical Talent Team Shannon Schiltz on the landscape for veterans in technology and insights on managing career transition.

Schiltz commented that a16z was particularly interested in the veteran community, because it consisted of individuals who were capable of operating under stress and of making complex decisions in ambiguous environments – abilities prized in the startup community. She was careful to add, however, that entrepreneurs had generally not made the connection between veterans and the qualities they seek in employees, and offered us some tactical suggestions for conveying our value to employers.

One-on-One Interaction with a Big Player in the Field
Our visit culminated with an appearance by a16z co-founder Marc Andreessen, interviewed by Don Faul, a former Marine Corps infantry officer and current Head of Operations at Pinterest. Andreessen spoke briefly about the changing nature of venture capital and responded to questions from the Veterans Club.

First year full-time Berkeley MBA student Michael Christman commented, "Getting the chance to visit a16z was a great opportunity. Especially so early in our first year, to get one-on-one interaction with a big player in the field and see how other veterans have succeeded in their transition from the military really opened my eyes about the skills veterans have that others find valuable."

Full-time MBA student Mark Lee also commented, “As a veteran transitioning to a career in technology, I was curious to learn more about the role venture capital firms play in silicon valley–particularly how they foster growth for their startup founders. The visit was a tremendous opportunity for us to hear from one of the most influential firms in the Valley, and I hope we maintain a strong relationship for future Veteran’s Club engagements.”

The Journey Home, as Old as War Itself
A recent survey by the U.S. Bureau of Labor Statistics found there are over 21.4 million veterans in the U.S. and 2.8 million from the recent wars in Iraq and Afghanistan. The transition from the military to civilian life is different for everyone and the journey home is as old as war itself.

“The Odyssey” is often cited as one of the earliest parables of a soldier struggling with homecoming, and many veterans find that the journey home has changed little in the 2500 years since Homer wrote his epic poem. While veterans like us have been afforded all of the privileges that an academic institution like Berkeley offers, it is important to know that the unemployment rates for veterans, especially those who have served in our recent wars, remains higher than the national average. Our trip to Andreessen Horowitz was a great sign that firms in the Bay Area recognize the value veterans add to their organizations and are engaged in supporting their transitions.

Our Berkeley-Haas vets learned about potential career transformations on this trek. Watch this video tribute to learn about the transitions students have made from the military to the Berkeley MBA.