If you tune in to the San Francisco 49ers game on November 23rd, you'll see 1st-year MBA student and former Marine Captain Mike Christman on the field at half-time. 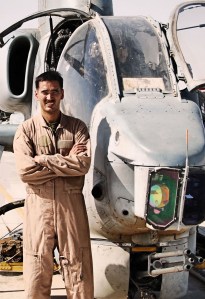 Christman served as a AH-1W Cobra Helicopter pilot and forward air controller, deploying for two tours in Afghanistan and one in Southeast Asia. While in Afghanistan, he also embedded with a battalion from the Republic of Georgia.

He sought a Berkeley MBA in order to pursue pragmatic solutions to global social issues that contribute to conflict. As a student, he says he's learning a new kind of leadership.

"I think for a lot of us, we really enjoyed the leadership part of the military, but we get that in a whole different way here," Christman says. "In the military, you get the top-down leadership style. But you really have to transition to lead without authority, to lead your peers again—which is very tough, but very rewarding."

The foundation was created by the family of Pat Tillman, an Arizona Cardinals player who put his NFL career on hold post-911 to join the Army. He was killed in 2004 by "friendly fire" while protecting fellow soldiers during an ambush.

The ceremony for Christman is part of the NFL’s annual Salute to Service. For every point scored at 32 games in November, the league will donate $100 to the Pat Tillman FOundation and two other veterans group.